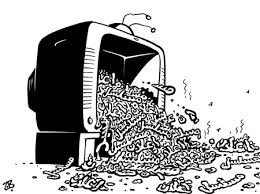 Rachel Thompson, several others, and I have spoken a little about the prevalence of spam in social media, discussion forums, and everywhere in between. It’s not just authors doing it, but that is the community we reside in so that is what we mainly see, and this blog is for authors–especially for the new and aspiring ones.

Newbies are more inclined to spam because that’s what everyone else is doing, or they have been given wrong information.

This section and this post has it’s foundations on ideas I have learned from Rachel Thompson with the ratio of promotional stuff to content stuff. Rachel puts more emphasis on Twitter since that is where she is 98% of the time, but this can be applied everywhere: Facebook, Google+, your blog…

Anyway, promotional stuff is basically centered around your or someone else’s (if you cross promote others) book stuff (since this is mostly for authors) or other secondary services that are offered. Or, it can be liking your Facebook page, friending on Goodreads, or some other type of social media activity. Most of the time it can be summed up as something that can lead outside of somewhere to something promotional or to a book or service.

Content is the fun stuff (most of the time without links) unless you are sharing someone else’s content from their blog or an article. This is the stuff that entertains, teaches, or informs your connections.

The general rule is to have more content than promo. 2 content for every 1 promo is the minimum. Even more content is better. Am I perfect? No. I try to be as entertaining and helpful as I can. Some days may be more linky than others, but that depends. I try to “bank” some content on non-promo days if some big promo thing will be going on. Topic for later?

Liken your social media stream(s) and blog posts to TV if you will. Everyone has their favorite shows or a movie they like to watch, right (when it comes on a different channel than HBO)? Your content is basically like that said TV show or movie for the people who like to read your posts, tweets, etc. Promo is the commercials just like those on the TV or the radio. Doesn’t everyone hate it when the movie or TV program stops for commercials and have to wait for the movie/program to come back on?

You should be nodding. Unless, of course, you want to have a break to grab a snack or make a mad dash to the bathroom before the movie comes on!

Some channels seem to “love their commercials”. The last hour of the movie or the last few minutes of the program seems to have more commercial interruptions on certain channels–when there wasn’t enough commercials during the other part of the program… Annoying huh? What do we do? We record the movie or program with TiVo or a cassette (if you still have a VCR) or DVD to skip the commercials or we skip the channel unless there is nothing else on or that movie is not on any other channel or not in the “movie drawer”.

Other channels, on the other hand, seem to have “the right amount” to where it is not annoying, but still have commercials. The movie channels have commercials in between movies as “filler” with none during. These channels are the ones that are watched most of the time, right? You see what’s on these before the former channel example, right? That’s what you want to be!

The Superbowl: The Epitome of Commercial Coolness

During the Superbowl is probably the only time that I know of when people enjoy the commercials as much as the game. They actually want to see what comes out and these are the commercials everybody talks about. They talk about these just as much as what the cool/dumb things their favorite teams do during the game. What comes back to the via the “viral word of  mouth” is what is repeated after the weekend on other channels for a set period of time.

You can make your promo just as cool and as entertaining as the Superbowl commercials. People talk about your promo as much as your content or stuff you find to share for content.

There isn’t a TV channel that exists today that has Superbowl-grade coolness commercials at the right amount with the best programming (at least in my opinion). Movie theaters and DVD’s seem to be close here.

That’s what my goal is to be.

Now there is no formula or order of operations to become this. It takes time, and it takes experimentation. It takes feedback from your followers and other people, research, and observation. That’s how the Superbowl found the “right ingredients”.

I’m still experimenting–I’m still pretty much a newbie author with a little bit of age on her. I am nowhere near “veteran” stage. Still finding my way.

Now social media is still to be social, so interact with others when they try to interact with you! The digital age has made it possible for fans to interact with their ‘entertainment’ to some extent. This is another general rule to keep a cap on the promo. Sharing a bit about life (only as personal as you want others to see) is another form of content and creates interaction. It makes you a person rather than an intangible “commercial” (if all that is posted is promo).

Life is not a commercial, so I don’t know why some folks behave this way. It’s a little strange. Will likening promo to commercials help? Won’t know unless people tell me 😉

So to keep people coming back to your channel tone down the promo, turn up the content, and work on making everything cool!